Advantages of an extinguishing robot

Using the extinguishing robot has a number of important advantages.

Chemical factories and refineries, railway yards, parking garages and tunnels, forests and heathlands are all areas that require a special approach from fire brigades. The risk of the fire spreading, of people getting trapped or of poor visibility due to smoke and heat make deploying people directly even more dangerous. Being able to gauge the risks and make well thought-out decisions as to how a fire should be managed are important factors. Here, it is important for disasters to be assessed under non-threatening circumstances, while keeping a distance from the risk.

The InnoVfoam extinguishing robot is operated through radio technology, controlling both the movement of the robot and the positioning of the fire monitors. Using a 360 degree camera, it is possible to project the image from the robot into VR glasses. This allows the operation to resemble the direct situation as seen from the robot.

This solution includes from the following products

The products are adapted to the wishes and requirements of your specific issue. 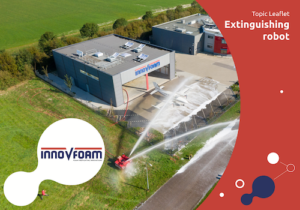