The use of fluorine-free extinguishing foam has a number of important advantages.

The Re-Healing foam developed by Solberg is comparable to AFFF thanks to a special formulation without fluorine chemicals. This is confirmed and guaranteed by international test laboratories that have tested the Re-Healing foam concentrate according to various standards. We have been an active distributor of the Solberg fluorine-free foam concentrates since 2005 and a large number of our clients use it. In 2017, we provided knowledge sessions in collaboration with scientists from the Vrije Universiteit of Amsterdam and Arcadis to highlight the health and environmental hazards associated with the use of AFFF with PFOS/PFAS. Offering a fluorine-free alternative played a central role in this. Since then, many countries in Europe have been considering banning AFFF-like extinguishing foams.

Fluorine-free foam concentrate is proportioned with extinguishing water in the same way and with the same percentage as conventional AFFF products. Replacing a conventional product with a fluorine-free extinguishing foam is technically speaking usually straightforward. However, the components that come in contact with the fluorinated AFFF product must cleaned thoroughly. We can take care of this swapping process for the client. In addition to removing and disposing of the old product, we also take care of the cleaning and we fill the foam tank with the fluorine-free product. In addition to that, we also test and commission the system, including the approval procedure. 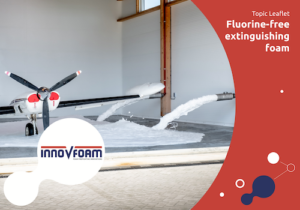 Over the past months, the engineers at InnoVfoam have been working on a stand-alone fire extinguishing system assembled in two 10-ft containers. In late February, the customer was present to see the successful Factory Acceptance Test (FAT) at InnoVfoam. The container systems were delivered complete with extinguishing monitors, foam tanks and inline proportioners. These will be used for fire protection during transhipment of flammable liquids and will be installed on the various port quays.